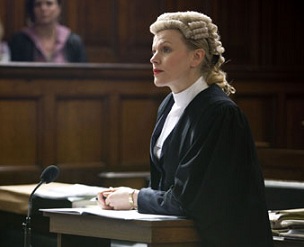 ...until an event so exciting I am likely to explode in anticipation.

Yes, dear friends, I refer to series 2 of Silk - the equivalent of career-porn for baby barristers. In the last series, the red-lipsticked-convertible-driving-Goddess Martha Costello took silk, despite the machinations and plots of her colleague (and former lover) Clive Reader.

See?! It's a perfectly accurate representation of life at the Bar. Ish.

If you didn't see the last series, and are considering a career at the Bar, it's absolutely compulsory viewing. I lied before, as far as I can tell it's nothing at all like the Bar (although it would be a far more exciting career were that not the case).

I have a few predictions for the next series:

1. Clive will fail, yet again, to gain the two magical letters he so desperately desires.
2. One of the pupils will still be at Shoe Lane (probably Nick), the other will still be in the series but perhaps at another Set.
3. Martha obviously can't have a new pupil (as she's now a QC), and Clive will refuse to take a new pupil on.
4. Billy will get dodgier. Obviously.
5. Martha will, at some point, bite off more than she can chew and get absolutely hammered in a case. She'll come back stronger.
6. Martha will find love. Clive won't. Poor Clive.
7. There will be a new baby-barrister. God knows who, or what they'll be like.

Mini
BPTC student, aiming to practice at the criminal Bar

Feel free to get in touch via email:
minipupil AT gmail DOT com